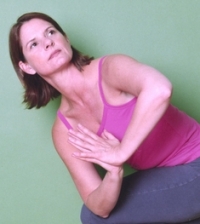 Cyndi Lee is the founder of the OM Yoga Center, with branches in New York City and East Hampton, New York. Cyndi teaches classes, teacher training, and special workshops at both OM studios as well as leading retreats worldwide—everywhere from Moscow to Memphis, Costa Rica to Cleveland, London to Las Vegas.

Cyndi's first yoga class was in college in 1972. After completing her graduate thesis, "Women, Spirituality, and Indian Dance," at UC Irvine, Cyndi arrived in New York as a recipient of an Art History Fellowship to the Whitney Museum of American Art. Once in New York, Cyndi began teaching yoga in Greenwich Village. Soon she became a fixture in NYC’s downtown modern dance scene, choreographing and performing primarily in XXY Dance/Music and Cyndi Lee Dance Company/Big Moves.

Cyndi choreographed over 20 music videos for Rick James, Simple Minds, Appolonia, and the Dirty Dancing soundtrack. She also did the choreography for Cyndi Lauper’s “Girls Just Want to Have Fun," which won the 1983 MTV Best Female Video of the Year award. After meeting her root guru, Gelek Rinpoche, in the late 1980s, Cyndi’s choreography merged with the practice of yoga and Buddhism. In 1994, Cyndi's last concert was "Dharma Dances", a performance that featured Allen Ginsberg singing his own songs and accompanying himself on harmonium.

Cyndi is the author and artist of Yoga Body, Buddha Mind; OM Yoga Today; OM Yoga: A Guide to Daily Practice; OM at Home, A Yoga Journal; and the OM Yoga in a Box series. Cyndi has been a contributing author to Will Meditation and Yoga Change My Life?; Joyful Mind; Joyful Wedding; and The Idiot’s Guide to Fitness. She has written for Tricycle, Dance Magazine, Ballet Tanz, Cooking Light, Spa Finder, Natural Health, and Breathe. She wrote the yoga column in the Shambhala Sun magazine from 2000–2003, and originated Yoga Journal’s "Vinyasa/Home Practice" column from 2004–2005.

Cyndi has been featured on CBS’ The Early Show, Live with Regis and Kathie Lee, and ABC’s Evening News. She has also been featured in national publications including Vogue, the Wall Street Journal, and Newsweek.